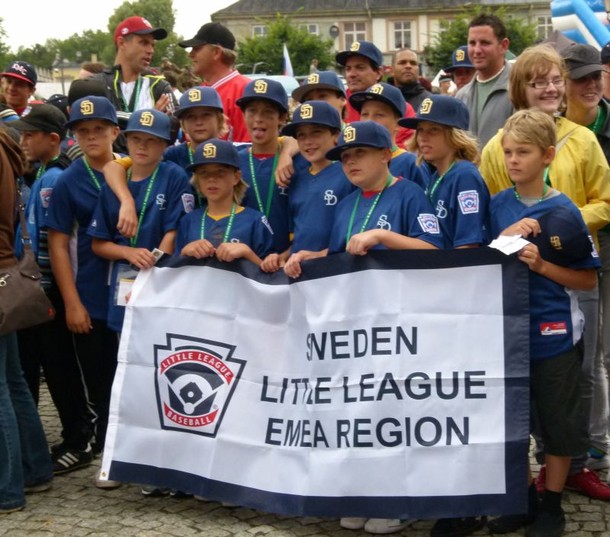 One day after Moldovia won against Ukraine we beat them to keep them from going to the knock-out round. Linus pitched 4 1/3 strong innings to get the win and Adam finished up the last 1 2/3 for the save. Linus started the scoring in the 6-run 3rd inning with a 2-run double and Adam ended our scoring with a game winning 2-run single, so it was a pitchers day!

We went to town for ice-cream to celebrate our win!

We are eliminated from the tournament but are going to play a friendship games against Moldovia and finish the tournament with a game against host Poland.

In summary, the tournament was great for the kids as they realize how far ahead the other countries in Europe are at this age. In the first game we averaged 2 strikeouts per inning as the pitching was much faster than all were accustomed too. But by the 5th game our hitting was fine with only 3 or 4 strikeouts over six innings and our pitching held up as well.

The kids are having a great time playing with the players from the other countries and after a few days have picked up on the pin collecting Little League is famous for.

The kids are looking forward to coming back next year – one year older and one more year of play under their belts. And armed with a bunch of pins to trade!

Day 4 - Best game of the tournament

The kids are starting to get the hang of real baseball. We scored our first runs today in a 12-3 loss to pool winner Czech Republic. But we played a great game with a couple of the other coaches commenting on how disciplined our team is and what heart they play with no matter the score.

Henke threw 4 1/3 good innings, Jesper knocked in our first run of the tournament and Linus had a 2 run single!

Tomorrow is our next game in the big stadium and our final pool game. We hope to get our first win!

Loss to Ukraine 10 - 0.  The pitching across the board for every team we have played is much better than the kids are used to in the 08 Series. The guys are getting better as we had a couple more hits than last game, but we still are stranding the base runners we do have.  And our pitching is much slower than teams are used too so when they get the timing they typically hit a few shots.

The kids have been playing with the Germany-US team whom unfortunately have been disqualified as they have a couple of players from another district playing who they thought had been approved. So the guys will need to find a new team to hang out with.

We played a tough match today. Linus opened up with 2 1/3 good innings and the defense was strong, then we made few errors and Belgium scored 11 runs in the third.

We hit the ball better today with 4 base hits and many fewer strike outs, so the kids are getting used to the significantly faster pitching.

This afternoon we will go to a local festival, after taking part yesterday in the parade down town and opening ceremonies

Loss in opener to Lithuania

We opened the tournament in fine fashion with a lead off single, but then did not get a base hit until the 4th inning, so we lost 11 - 0. We played good defense and Leo Backstrom pitched well.

An Update from Kutno

The team arrived in Kutno after a 26-hour trip via car and boat.  The team registered, had lunch in town then took batting practice and field practice. We also got our draw: Sweden, Czech Republic, Lithuania, Belgium, Moldovia and Ukraine is group B. The other group includes Germany-USA, Great Britain, Italy, Netherlands, Poland and Belarus. So all in all a good draw to try and make the knock-out round. We also drew Home team for all of our games through winning the coin toss!

First game against Lithuania at 10:30.